I have the best fiancé. He makes all the wedding details—like the dress, the dinner and the guestbook—trivial. Here’s only a few of the things I love about him.

1. He trekked around an amusement park for five and half hours on Saturday taking engagement photos. His family has hinted at how much he hates to take pictures, but as we were posing for the camera all day he never let on.

2. When I moved in, my commute practically tripled! He changed his work schedule to accommodate mine. Now he wakes up early to drop me off at the train in the morning and he picks me up every night.

3. After we get home from work, he lets me shower while he makes dinner. He’s a master in the kitchen, too. Last night we had a delicious grilled pork chop with a brown sugar glaze.

4. He’s a loyal friend and family member. He’s even a loyal fan. He pulled out his 49ers jersey the night before the season started and put it on at game time, even though we were watching the game from home.

5. He brought me to Italy to propose! Wait, maybe this should go at the top of the list! 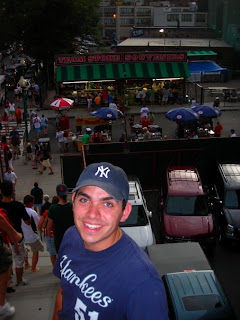 Reason #5,973: He brought me to a Red Sox game at Fenway Park even though he's a Yankees fan.

There’s hundreds and hundreds of other things I love about my fiancé, but now I want to hear from you. What do you love about your fiancé, boyfriend or husband?

When I asked for a love letter, he wrote me a love song.

He makes the most perfect scrambled eggs...just for me.

He always makes sure I have enough covers.

He took me to a mountain top in Vancouver to propose :)