I didn’t watch Bravo’s Bethenny Getting Married? But I did catch the wedding and, as gorgeous as it was, one thing that really stuck in my mind was how adamant Bethenny was to keep her own last name. In one scene she gets a little defensive when her assistant tells her that the newlyweds will be announced as Mr. and Mrs. Jason Hoppy at the wedding. “I’m not taking his name,” she insisted. “They’re only going to call me that tonight, right?”

Bethenny isn’t the only one attached to her family name. In the new movie Eclipse, Bella Swan appears to be a little nervous about becoming Mrs. Edward Cullen. Is she afraid to marry a vampire? Oh no. “These are modern times,” she says. “Can I at least hyphenate?” 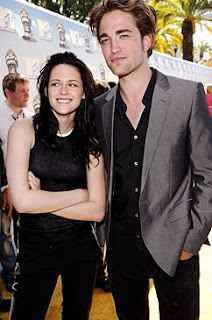 Will Kristen Stewart ever be Ms. Kristen Stewart-Pattinson?
Lately it seems that not taking your new husband’s name is like serving cupcakes instead of wedding cake—the hottest trend in matrimony. I understand why Bethenny wants to remain Ms. Frankel. It’s not because she’s afraid people will call her Hippy Hoppy. Bethenny Frankel is a brand. Her name is her livelihood.

I’m quite honored to take Keith’s last name, especially because it’s one he shares with my grandmother’s family. To me, it’s a little bit of sentiment and a little bit of tradition that gets me excited about going to the DMV to claim my new name. I don’t disagree with women who keep their names. But I do wonder how it would feel to have a different name from your children, or how the mail would be addressed. Come to think of it, I am a little bit upset about losing the tote I had monogrammed with my initials several years ago. I guess I’ll just have to add a new one to my registry.

Tell me, did you keep your maiden name after you got married? What were your reasons? Are you glad you did?

In theory: I would likely keep my own name. Maybe I'm just too lazy to do through with changing it, or maybe I'm anti-traditional, but it's part of who I am. And marriage doesn't mean, to me, changing my identity so why would I change the one thing that's been mince since the day I was born.

In reality: I hate my last name,s o if my hubby had a better one, I'd change it so I wasn't an object anymore. :-p

Also, how would your ex-boyfriends stalk you on facebook once you changed your name?

I actually got crap from my aunt and uncle for changing my name . . . I really think, to each his/her own. My main reason was to be one family, with one name. I want to have the same name as my husband and my children. It's that simple!

This is definitely a hot topic! I hear it debated all the time. I believe each woman needs to decide what is best for her. My sister got married 12 years ago with the intention to change her last name. At first, it was plain laziness at all the paperwork involved. Then she realized she didn't want to change her last name. It's the right decision for her. I'm getting married in January & I plan to take my fiance's last name because we're traditional. But I have no illusions that dropping my last name will not be difficult because I am attached to it. & hey, I have tons of cute monogrammed items too!!

I didn't even take the stalking into consideration... I think that's a case for changing... ha!