This weekend I’m taking a break from planning for my best friend Maura’s wedding. Maura and I met freshman year of college. When we found out that we were both interested in cheerleading, we were immediately relieved that we wouldn’t have to walk into an intimidating college try out alone. We both made the team and we’ve been friends and sometimes roommates ever since.

Maura is marrying our college friend, Rob. Rob and I were communications majors and took several classes together. I like to take the credit for setting these two up. I dragged Maura to a party at Rob’s apartment one Friday night because I liked his roommate. I didn’t have any luck, but Maura hit the jack pot. 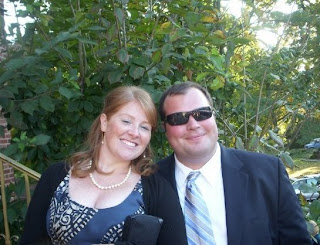 Maura and Rob, looking pretty good at a friend's wedding. Now it's their turn to wed!
I have to tell you about the sweet way that Rob proposed: He’s a newspaper reporter and often asks Maura to proofread his stories. When he came home from work one night, he casually handed her a newspaper layout he had been working on and asked her to take a look. Maura read it and thought it looked ok. “What about the ads?” Rob asked. “Why don’t you look at the ads for me, too.” That’s when Maura saw what she thought had been an ad for a jewelry store, but was really a picture of her engagement ring and the big question, “Maura, will you marry me?”

Maura said YES and now I’m headed to New Jersey to watch them get married. Maura asked me to be a bridesmaid, so I have the extra special honor of spending the night and morning before the wedding with her. She’s going to make such a beautiful bride and I’m so excited to see her on her wedding day. I can’t show you her dress (till next week) but I can show you mine: Isn’t she the best!

What a clever way to propose...Have fun at the wedding!

Such an awesome proposal! Love the creativity!

Love the dress! Where is it from? Maura and I actually went to high school together!

Rebecca, the dress is from J. Crew. It was so comfy and didn't need any alterations!