Hi, I’m Elizabeth and a year and a half ago I met the man of my dreams. His name’s Keith and we literally bumped into each other at the birthday party of a mutual friend. We started dancing and before the end of the night I knew that I was going to marry him. 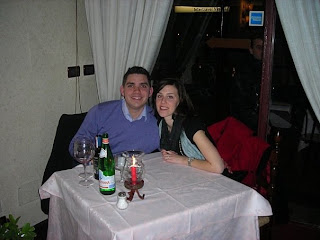 Four months ago Keith asked me to join him in Florence, Italy, where he would be working for a few days. Little did I know as I packed my bags that he had some other business in mind as well.
Marriage was something we had already discussed so I allowed myself to entertain a few fantasies about a romantic Italian engagement. But I didn’t want to get my hopes up so I dismissed all thoughts of soon-to-be wedding bliss and just focused on enjoying our trip. 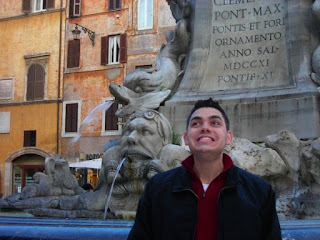 Keith, the man of my dreams.
The night that I arrived I waited for Keith in the lobby of the hotel. I was jet lagged from the trip but too excited to nap. “What do you want to do tonight?” he asked, leaving the plans for the evening entirely up to me. It was my first night in Italy so I suggested something low key. “How about a stroll through that Piazza de what-chu-ma-call-it and dinner,” I offered.
With that, we clinked out glasses, finished one last sip of Prosecco and headed out the door. Completely unaware that Keith was toting a major rock around in his jacket pocket, I giggled at the replica statue of David and the breathtaking view of Florence from the Piazzale Michaleangelo. I was still giggling when Keith started talking about his day at work. “I learned something in Italian,” he said. “Ti Amo. Vuoi sposarmi.” I had no idea what that meant but caught on as soon as he reached into his coat pocket and lowered himself onto one knee.
I said yes. But I don’t remember much after that. 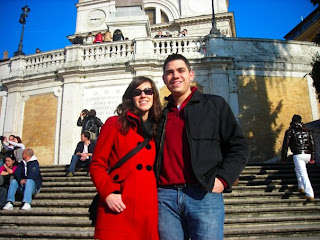 Those post-proposal minutes may be blurry, but I’ve got a pretty clear idea of our wedding plans and I’m really excited to share them with you. I hope you find some inspiration from our experience!

What a romantic story... many girl's dream come true! Can't wait to hear how the wedding plans come together. Are you going with an Italian theme ;-)